I Am Mariam Binladen

From 1875 on, more than 2000 people have already managed to cross the Strait of Dover, but many more have failed. This performance is to swimmers what Everest is to mountaineers: a legend. Mariam first heard about this discipline from her mother when she was 11. She told her about Abdellatief Abouheif (1929-2008 Alexandria), the first Arab man to cross the English Channel. That story stuck to Mariam’s mind when she was a child and now, 20 years later, it’s become her own dream. Mariam’s last name is Bin Laden: a surname that still scares. Osama Bin Laden was one of Mariam’s 52 uncles. Bin Laden is a difficult name to carry. But the fact that a black sheep in the family did what he did shouldn’t stain their family’s honour, a family that did and still does a lot for Saudi Arabia’s progress and welfare. Mariam dives into the water and there she goes. She’s not yet swimming in the English Channel. She’s swimming in the Thames, 225 km north of London. Ramadan will be underway in just a few days making her journey all the more challenging. She has 10 days to reach the capital of England, a performance that will make her the first woman to swim down the Thames…An excellent training for Miriam in view of the Channel challenge. 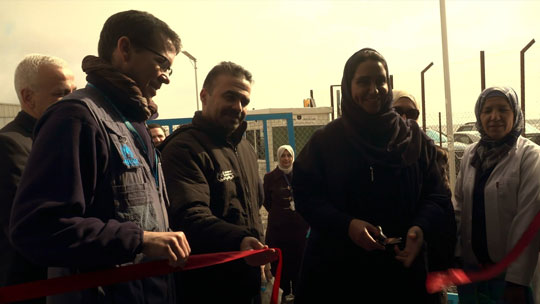 “I used to teach skiing when I first heard about Mariam. A relative of hers told me about the challenges of this young Saudi girl, but also about that progressive and all-female world that she tries to represent. I immediately decided that this story deserved a documentary. It was only after a few days of getting to know her that I was then given her last name and so we decided that the film would also talk about the difficulty of being linked to that character belonging to the family who has left an indelible mark in the history of this new millennium. Then the wind in Saudi Arabia changed and the uncertainty for the powerful families of the kingdom also affected the fate of this small documentary. We had to accept several revisions and the part related to the surname was removed. But perhaps the answer to the question that everyone would like to ask a Binladen, has become the film itself, because just to feel like an ordinary person, Mariam had to do something exceptional …” Vito Robbiani