Wonderkids - From school desks to the charts

Many of the musical genres that are popular in Italy at the moment, such as urban and it-pop, have several aspects in common. What is striking is above all a radical change of paradigm compared to the past: if until twenty years ago most of the bands, or individual artists, emerged after a long apprenticeship made up of provincial stages, competitions, demos, rehearsal rooms, covers and music lessons, and if until ten years ago the best way to get noticed was to participate in a talent show, the new stars of today and tomorrow do everything without even leaving the bedroom. Generally they are very young, technologically very smart guys: they publish songs that they write, produce and record on their own, often without having a real musical training. Their stage is social media and streaming platforms, and to get to success and the long-awaited record deal it can take only a few weeks (and just as many could take to fall into oblivion, the downside). Their stories are profoundly different, but they all resemble each other, after all: also thanks to the changes in the market and the increasingly overwhelming weight of the image, streaming and social media, for the first time we are faced with a lever of rookies absolute that sometimes manages to transform passion into a profession even before having finished high school. But if fame is close at hand, is it always advisable to grasp it immediately without having the artistic and personal maturity necessary to extricate yourself in a world of sharks? 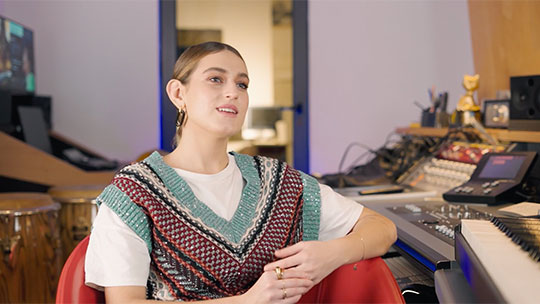 The challenge of this documentary lies in telling two generations of artists, two different ways of making a career, both in terms of words and visually. The pop colors and urban-style graphics create a gap between the interviews with young singers and the more linear narration of professionals from the entertainment world who will explain this paradigm shift. The narrative develops around the lives of young boys whose everyday life has been turned upside down in a few days. It will start from where it all started: their homes, bedrooms, the first PC programs used to upload the tracks to the network. The theme addressed in the documentary is interesting because it is absolutely new and constantly evolving. GenZ, new social networks, new media and the possibility of potentially reaching thousands of people. This also has its downsides: cyber bullying, hater management, and first-person follower management. Each artist can reach any person in the world but the whole world can enter him without filters or protections. The theme remains transversal for all these artists, even if the productions are different and the musical genres change, the approach to music remains the same. This is why artists like Anna from “Bando” emerge who with 10 euros for a session and a profile on Spotify found herself first in the charts and with a platinum record in her pocket within a few days. Directing a documentary like this gives the possibility to make a product that is visually strong thanks to the artists interviewed but also has a strong history of change that tells a turning point in the history of music.