Prayer for a lost mitten

The night is falling and Montreal is under the snow. People line up at the lost and found office of the city’s transit company. They all have lost something, which, upon reflection, becomes the symbol of a deeper loss. Prayer for a Lost Mitten is a creative documentary by turns melancholic and festive, yet ever compassionate. A film that helps us get through the winter. 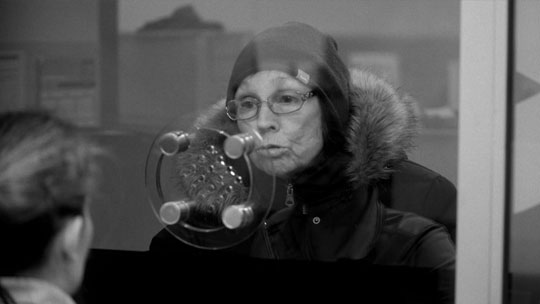 With Prayer for a Lost Mitten, I set out to explore the ideas of loss and longing — a longing for what is lost. From the get-go, I wanted to imbue my work with a certain nostalgia, which I did by filming in black-and-white and adding a jazz soundtrack, nodding to certain key films of the 60s. I also felt the Lost& Found at the Société de transport de Montréal would be a great place to start looking for protagonists. I wasn’t wrong.
My approach revolves around the notion that anyone could be the subject of a documentary. Everyone has something interesting to say; you just need to take the time to listen. It’s a question of perception. This theory, so rich in creative possibility, was however put to the test during the shoot, when my protagonists proved averse to spending long hours outdoors through the cold winter nights with my team. They ended up being less generous with us than they might have been during a summer shoot. Entirely understandable, of course. But for me the theory still holds. To up the nostalgia factor further still, my working method is inspired by the 1974 Harmonium classic “Un Musicien Parmi Tant d’Autres” and its anthemic line:
“On a mis quelqu’un au monde, on devrait peut-être l’écouter”
Which roughly translates to: “We’ve brought someone into this world, we should perhaps listen to them”.
Jean- François Lesage