In Kerch, in the Crimea, a minority of Italian origin who arrived there in the 1800s, struggles for their history to be recognized and told. This community of Italians in 1942 was accused of supporting the fascist regime and of collaboration with the German troops during the city’s occupation. Between 29 and 30 January, Soviet soldiers began the deportation of the Italians. The whole community was loaded onto freight trains to the icy Kazakh steppes. The first wagon stopped at Lake Aral. At the time the inhabitants of those places called it the sea, it was the fourth largest reservoir in the world, and supplied fish throughout the Soviet Union. 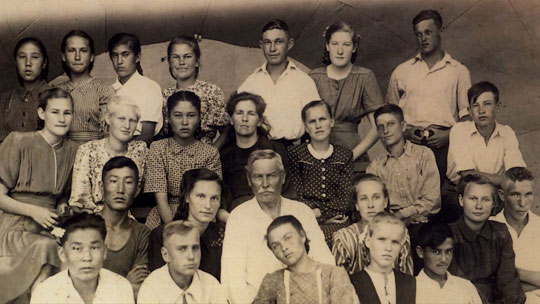 Until 1992 the history of the Soviet forced labor camps was solely a history in the memory of the survivors. The Soviets long denied the very existence of forced labor camps and in western countries there were strong communist parties loyal to Moscow which, as well, denied the facts. Although the first concentration camps to isolate the enemies’ class had already been organized in the aftermath of the Bolshevik revolution, the deportation phenomenon to scattered small special villages in North and Kazakhstan started since 1929. The rationale for this Soviet system was always the preventive identification, for the purpose of possible repression, of all those categories of the population that could, for their political ideas or for their profession or for their nationality, threaten the internal and external security of the newly born Soviet state.
Stefano Conca Bonizzoni