The documentary film is an emotional tale of a mission to Haiti, between the charitable activities of the Francesca Rava Foundation – NPH Italy and the great contrasts of a country where despite the difficulties survive hope, natural beauty and folk traditions. With Martina Colombari, volunteer for 10 years and testimonial of the Francesca Rava Foundation – NPH Italy, which has already carried out 10 missions in the country alongside the Foundation. Haiti is a very poor country, one of the last in the world ranking in terms of childhood conditions, statistics of mortality and poverty: 10.5 million inhabitants, 56% suffer from malnutrition, every hour 2 children under 5 years die of malnutrition and treatable diseases, 1 in 4 do not go to school, the average life expectancy does not exceed 55 years, 80% of the population lives on less than a dollar a day, 70% have no work, 45% of the wealth is in the hands of 1% of the population. There is a lack of infrastructure, public sewage systems, electricity distribution, roads and hospitals. The earthquake of January 2010 caused 230,000 deaths and 300,000 injuries, left 1 million people homeless, many of whom still live in makeshift homes. After the 2010 earthquake, 4 hurricanes, a cholera epidemic and a new earthquake struck the island. 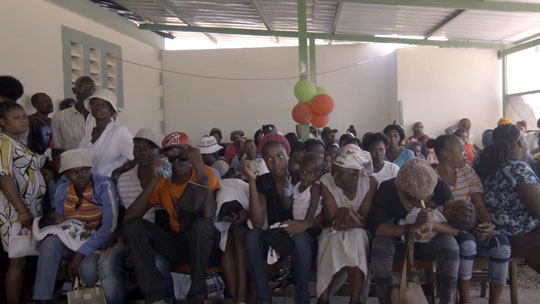 Haiti is a country of strong contradictions.
It has an exotic name that recalls wonderful Caribbean holidays but it is a place where there has been a dramatic emergency situation for the population for many years.
I have been to Haiti four times and, every time, I have seen this emergency, I have breathed it and it is of a serious nature that leaves no doubt. It goes straight to the heart.
I decided, with Martina Colombari, to make this docufilm, in support of the Francesca Rava Foundation, because the commitment of Mariavittoria and her collaborators really saves a lot of human lives.
“Haiti” was shot in 5 days by a crew of 4 people and was entirely self-produced.
We help and support the Francesca Rava NPH Italia Foundation in their missions, they are true angels on Earth.
Marco Salom