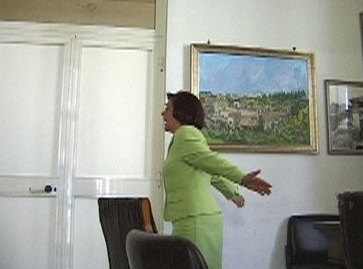 The film deals with the first two years in charge of Luisa Bossa, former high school president, as a Mayor elected in Ercolano, a small town in the suburbs of Naples, who has to face big and small everyday problems of ordinary people. Through her person and activity, the director shows the Italian microcosm of those years after the period of Tangentopoli, Mani pulite(the big italian business and political corruption scandal of the early nineties).

“Trough telling a story set in Ercolano I wanted to eliminate the usual stereotypes about the Neapolitans.  So I did not use the technique of people’s direct exposure but I filmed them in situations where they could not control their image. The presence of a camcorder certainly creates a tension, but at the same time it works as a third-party scene, revealing the role game between the institutions and the population.” (Leonardo di Costanzo)