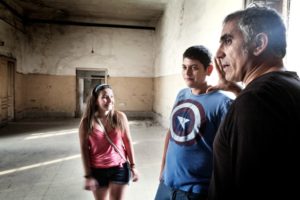 The 3rd International Documentary Festival A Window on the World, Images from Reality celebrates the great documentarist Leonardo Di Costanzo with an almost complete retrospective of his productions, honoring him with the award Premio Visioni dal Mondo, Cinema della Realtà 2017. Furthermore, Leonardo Di Costanzo will be the protagonist of the masterclass “Dal film documentario al cinema del reale”, scheduled on Sunday, 8th October at 11:30 am – Sala Tiglio, UniCredit Pavilion.

Leonardo Di Costanzo was born in Ischia in 1958. After having worked in the French Cinema in the 80s, the director dedicates himself to the documentary genre telling the reality which surrounds him and stories capable of having an impact on the unconscious of the spectator like it is the case in Prove di Stato and A scuola, which has been selected for the section of Best Documentary Feature at the David di Donatello in 2003. At the beginning of the century, Di Costanzo made other productions such as Odessa and Cadenza d’inganno, focusing on the most difficult working-class backgrounds in Naples. In 2012 the director makes his debut in Fictional Cinema, even if it remains interwoven with the work method experimented in his documentaries. The result can be seen in L’Intervallo, presented at the 69th Venice International Film Festival in the section Orizzonti and enthusiastically embraced by the critics who awarded the film with the Ciak d’Oro for Best Picture and Best Debut and the Gran Premio given by the foreign press at the Globi d’Oro 2013, Leonardo Di Costanzo receives furthermore the David di Donatello for Best New Director. The success of the famous documentarist is reconfirmed in 2017 with his movie L’Intrusa that has been selected in the section Quinzaine Des Réalisateurs of the 70th edition of the Festival of Cannes. L’Intrusa will be released in Italy on September 28th.