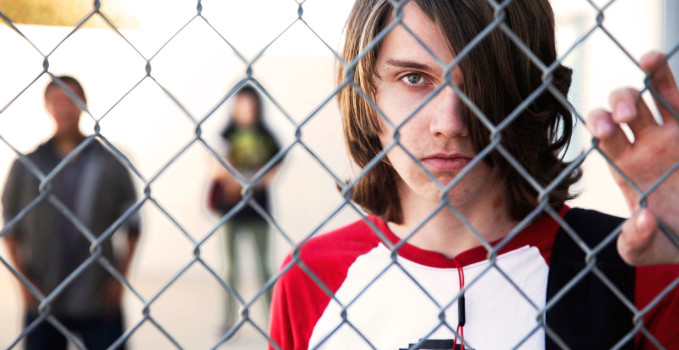 Located in an impoverished Mojave Desert community, Black Rock Continuation High School is one of California’s alternative schools for students at risk of dropping out. Every student here has fallen so far behind in credits that they have no hope of earning a diploma at a traditional high school. Black Rock is their last chance.

The Bad Kids is an observational documentary that chronicles one extraordinary principal’s mission to realize the potential of these students whom the system has deemed lost causes. Employing a verité approach during a year at the school, the film follows Principal Vonda Viland as she coaches three at -risk teens––a new father who can’t support his family, a young woman grappling with sexual abuse, and an angry young man from an unstable home––through the traumas and obstacles that rob them of their spirit and threaten their goal of a high school diploma.

But The Bad Kids is not just a story of one teacher making a difference. It is a look at a practical model for how public education can address and combat the crippling effects of poverty in the lives of other American schoolchildren. Parallel to her efforts with the three main characters, we also see Viland’s philosophies in constant application: through the customs of the school, through her attentions to other teens and their crises, and through her tireless efforts to promote the school’s mission both within the district and at the state level.

The Bad Kids is not a story of triumph against all odds, because that isn’t the reality of these students’ lives or expectations. It is a story of taking achievable steps toward pride and security.

In 2011 Teaching Channel, a Gates Foundation start-up, commissioned us to make a series of short films about exceptional public school teachers. We felt it would be much more interesting to find exceptional teachers who were doing their best in difficult circumstances, and thus limited our search to inner city and rural schools. We found there our share of devoted teachers, all of whom were vocal about the same issue: there was only so much a teacher could do without the resources to handle the unique problems of an impoverished student body. From that point on, we found ourselves building an alliance not just with these teachers and their schools, but also with the beleaguered institution of public education itself. Those alliances led us to a yearlong production, The New Teacher Experience, for which we followed four young teachers in the first year of their careers at two of L.A.’s most challenged high schools. Despite the schools’ ‘failing’ reputations, we again found tremendous devotion among the staff and administrators. But the schools’ unwieldy teacher-to-student ratios and desperate lack of funds awakened us to a heartbreaking problem: our culture expects its idealistic young teachers to wage a losing battle. No amount of devotion can solve the problems of poverty in the classroom. Not without a meaningful commitment of resources. It was during one of our scouts for Teaching Channel in the Joshua Tree area that we first stepped through the doors of Black Rock High. What we saw there left an indelible mark. Here was a safety net to catch the very problems that were causing other teachers and schools to ‘fail.’ Here was a principal who had a kind word or nod of recognition for each and every kid; a secretary who spent all day on the phone with parents; teachers who didn’t lecture but moved through their classrooms in quiet consultation with each student; and these supposed ‘bad kids’ lining the hallways with their guitars, their laughter, their clear and familial support for one another. All of this at a public school … with rising graduation rates. It is the greatest hope of any documentarian to gain intimate access to a subject that dramatically represents a pressing human issue. At Black Rock High we have found precisely that. It is a school that tackles head-on America’s most serious education problem: intractable, generational poverty. About such a crisis, one can make a film that speechifies and rattles off facts and figures, but at Black Rock we have the opportunity to create a moving and immersive drama that brings to life an inspiring attempt to combat this issue.