The 2nd International Documentary festival ‘Visioni dal mondo, Immagini dalla realtà’ ( A Window on the world, images from Reality) has taken place from the 5th to the 9th of October, at the Unicredit Pavilion, in Piazza Gae Aulenti, in Milan.

On the closing date of the festival, (9th of October), Cristiana Capotondi, famous italian actress and the hosting lady of this edition has led the awarding ceremony  related to the “Stories of the Contemporary World’s” competition,  dedicated to  independent Italian filmmakers. 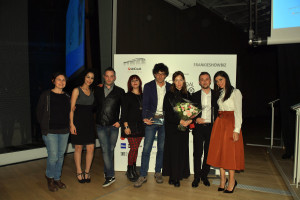 The Winners of the contest were: Ero Malerba, directed by Tony Trupia  and The Weight of Dreams directed by Francesco Matuzzi

Synopsis: Ero Malerba narrates about Sicily, the Mafia Wars, the ancient contradictions of a troubled region, but above all the desire for intellectual and cultural redemption of a Mafia killer who was jailed in the 70ies for multiple vengeance’s homicides. From being illiterrate, once entered in prison,  he started studyng and graduated, He wrote a book togheter with a journalist and friend, that has become the script for this documentary.  Ero Malerba is a story of a desperate final salvation effort of a killer wanting to escape the domination of violence and evil

Synopsis: The Weight of Dreams tells the story of a couple of truck drivers, she Moroccan,  he Italian, who form an international  truck driving team, that travels all over Europe.  They work togheter, and they fall in love, get married, and…Work and love, character’s and cultural clashes are the ingredients of a beautiful human story, In the background today’s Europe, host of large and desperate migrations.

Special mention from both juries to Uncut, directed by Emanuela Zuccalà and Simona Ghizzoni

Synopsis: Uncut is the tale of the cruel practice of infibulation, from the voice of the protagonists who practice it or suffer it. Traditions and ancestral cultures, domination of man over woman, however, seem to finally be questioned even by the protagonists. Something starts to change…