David Hare, whom The Washington Post referred to as “the premiere political dramatist writing in English”, writes and stars in this innovative animated feature that explores the reality of the wall separating Israel and Palestine as no film has before. Animated and directed by Cam Christiansen, WALL is the first animated feature documentary produced by the National Film Board of Canada.

“I really like the visual medium and exploring new territory. You can create different worlds where the only limit is your imagination. A lot of animated films are shot in pieces, someone talking, someone moving, and then assembled. My thinking was to have all our actors in the same space, and shoot everything in real time; performances are much more natural when characters are reacting to each other, rather than to an empty green space. We recorded the motion of the bodies and the performances using a head camera so I could incorporate that footage of the face into the animation itself.” (Cam Christiansen) 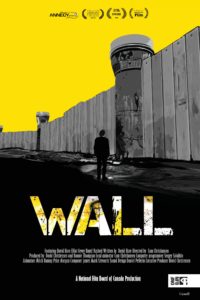