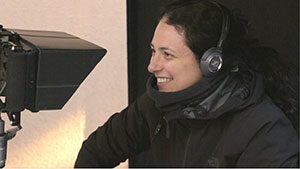 The 4th International Documentary Festival A Window on the World, Images from Reality celebrates the documentarist Costanza Quatriglio with some of her most significant productions, honoring her with the award Premio Visioni dal Mondo, Cinema della Realtà 2018. Costanza Quatriglio will be the protagonist of the masterclass “Il racconto del reale”, scheduled on Sunday, 16th September at 11:30 am – Teatro dell’Arte, Triennale di Milano.

Her most recent works reflect a constant attention to genre mixing. Terramatta; won Nastro D’Argento for Best Documentary in 2013 and several accolades at many events, was screened at Giornate degli Autori 2012, and was named Film della Critica by the National Union of Italian Film Critics. Con il fiato sospeso (Holding my breath), shown at the 70th Venice Film Festival 2013 in the Non-Competing Section, was awarded the Gillo Pontecorvo Award as Best Movie in a Latin Language and commended at Nastri d’Argento for the interplay of fiction and documentary. Triangle, Nastro d’Argento for Best Documentary in 2015, won the Cipputi Award for Best Movie about the world of work at the 32nd Torino Film Festival. 87 ore (87 hours) won the Special Award at Nastri d’Argento 2016 in the Documentary section.  Her last work, Sembra mio figlio (2018), which marks Costanza’s coming back to the Fiction, has been premiered at Locarno Film Festival in the official Non competitive Section.