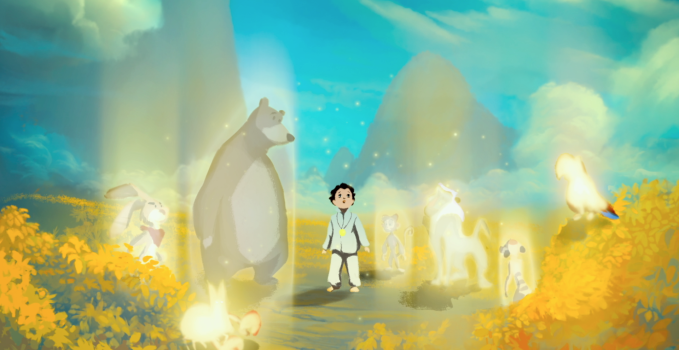 At three years old, a chatty, energetic little boy named Owen Suskind ceased to speak, disappearing into autism with apparently no way out. Almost four years passed and the only stimuli that engaged Owen were Disney films. Then one day, his father donned a puppet—Iago, the wisecracking parrot from Aladdin—and asked “what’s it like to be you?” And poof! Owen replied, with dialogue from the movie.

Life, Animated tells the remarkable story of how Owen found in Disney animation a pathway to language and a framework for making sense of the world. By evocatively interweaving classic Disney sequences with verite scenes from Owen’s life, the film explores how identification and empathy with characters like Simba, Jafar, and Ariel forge a conduit for him to understand his feelings and interpret reality. Beautiful, original animations further give form to Owen’s fruitful dialogue with the Disney oeuvre as he imagines himself heroically facing adversity in a tribe of sidekicks. With an arsenal of narratives at his disposal, Owen rises to meet the challenges of adulthood in this moving coming-­‐of-­‐age tale.

Inspired by the book by Ron Suskind “Life, animated: a story of sidekicks, heroes, and autism”

“My films have always been about championing the outsider – this is what makes filmmaking such an exciting adventure. With LIFE, ANIMATED, I wanted to tell an incredible story but I also wanted to create a space that would offer insight into Owen Suskind and other people living with autism. Owen is a unique person for many reasons, chief among them are his emotional openness and scrupulous honesty. His vision of the world is extraordinary because he is unencumbered by many of the world’s social cues whose main purpose is to restrict behavior and curb spontaneity. And that’s very refreshing to me. What Owen has done by living his life immersed in myths and fables is find a way to dissect the world and in so doing he has come to an incredibly wise and rich understanding of the human condition. What Owen draws from these classic stories is an understanding of the world that is as deep and complex as it is inspirational and instructive. It was important to me to get inside Owen’s head and tell his story from his point of view. Too often the world looks askance at people who are outside of society’s mainstream; this film is about looking at one of these outsiders in great detail, but from the inside, looking out at the world. The process of making LIFE, ANIMATED expanded my vocabulary as a filmmaker, translating Owen’s unique way of seeing the world into pictures and sound that help us better understand a truly extraordinary individual.”